Fractional Vegetation Cover as an Alternative for Leaf Area Index

Fractional Vegetation Cover (FVC) is an important indicator of greenness and has a strong correlation with green biomass. Simultaneously, it is the key trait of interest for characterizing crop growth status in crop breeding and precision management.

Fractional Vegetation Cover (FVC) is an important indicator of greenness and has a strong correlation with green biomass. Simultaneously, it is the key trait of interest for characterizing crop growth status in crop breeding and precision management. Why have we added this new module to Petiole Pro and how to work with it? Please, find the answers below. TEST

What is Fractional Vegetation Cover and why is it useful?

One of the earliest research papers, which features fractional vegetation cover, is “Remote estimation of soil moisture availability and fractional vegetation cover for agricultural fields“. It was published in 1990. This parameter represents the fraction of the land surface covered by green foliage in the two-dimensional plane. FVC of crops is closely related to the growth status of the crop, which can further estimate the yield of food.

Starting from that time, more and more scientists use Fractional Vegetation Cover as a parameter for evaluating crop-growth status.

How to measure Fractional Vegetation Cover for crops?

The basic methods to measure Fractional Vegetation Cover for crops are remote sensing, Unmanned Aerial Vehicles. For smaller crops the special equipment (like GreenSeeker) and a mobile application in a smartphone can help to measure the green foliage index.

5 Research Papers about Fractional Vegetation Cover You Must Know

On the relation between NDVI, fractional vegetation cover, and leaf area index

The following points are made: 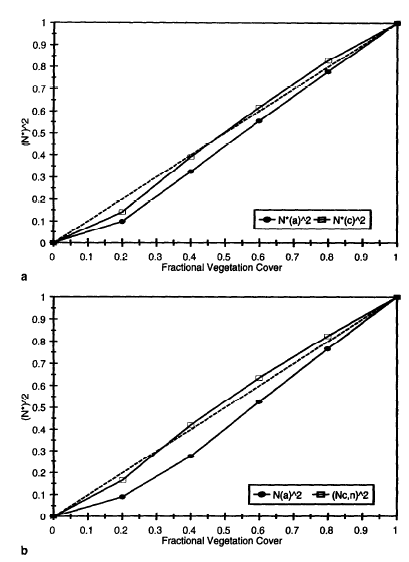 Scaled NDVI squared (N”‘) versus fractional vegetation cover based on the apparent [uncorrected, N” (a); solid circles] and corrected radiances [N”(c); open rectangles] for a threshold LAI of 3. The dashed line indicates the 1:1 correspondence; (a) 15-km visibility; (b) 5-km visibility.

Fractional vegetation cover (FVC) is an important parameter for evaluating crop-growth status. Optical remote-sensing techniques combined with the pixel dichotomy model (PDM) are widely used to estimate cropland FVC with medium to high spatial resolution on the ground. However, PDM-based FVC estimation is limited by effects stemming from the variation of crop canopy chlorophyll content (CCC).

To overcome this difficulty, we propose herein a “fan-shaped method” (FSM) that uses a CCC spectral index (SI) and a vegetation SI to create a two-dimensional scatter map in which the three vertices represent high-CCC vegetation, low-CCC vegetation, and bare soil. The FVC at each pixel is determined based on the spatial location of the pixel in the two-dimensional scatter map, which mitigates the effects of CCC on the PDM. To evaluate the accuracy of FSM estimates of the FVC, we analyze the spectra. It was obtained from (a) the PROSAIL model and (b) a spectrometer mounted on an unmanned aerial vehicle platform. Specifically, we use both the proposed FSM and traditional remote-sensing FVC-estimation methods (both linear and nonlinear regression and PDM) to estimate soybean FVC. 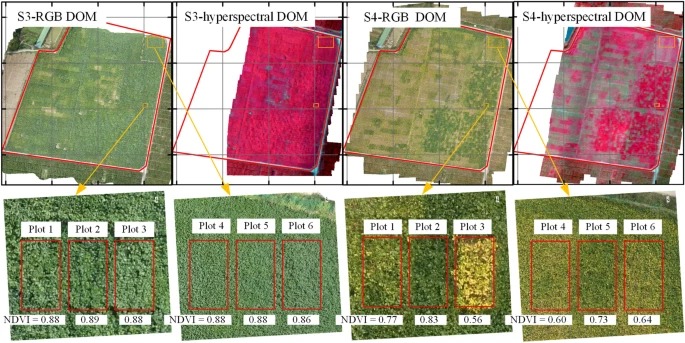 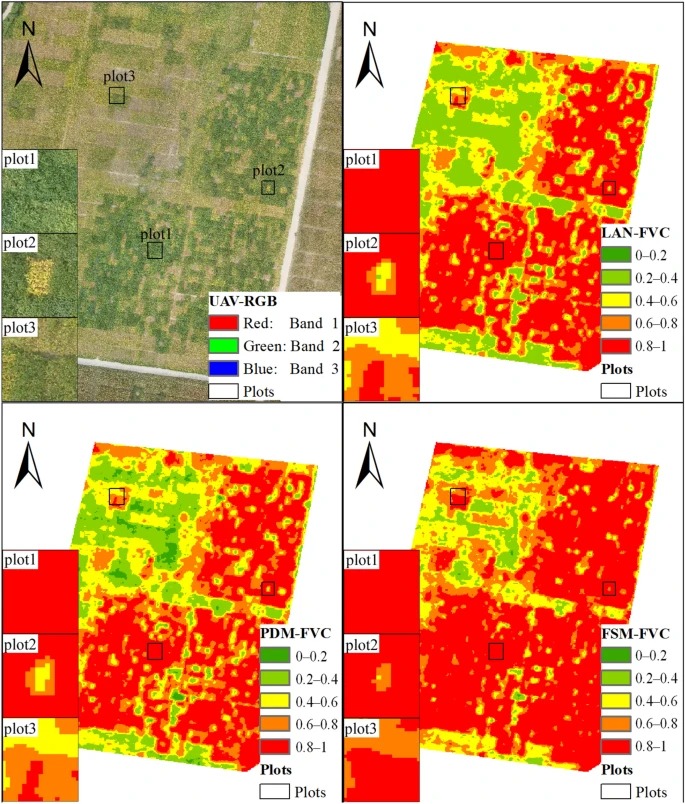 With high spatial resolution remote sensing images being increasingly used in precision agriculture, more details of the row structure of row crops are captured in the corresponding images.

Therefore, developing an algorithm to address this problem is necessary. This study used World-View 3 images as data sources and attempted to use the canopy reflectance model of row crops, coupling backward propagation neural networks (BPNNs) to estimate the FVC of row crops.

Compared to the prevailing algorithms, i.e., empirical method, spectral mixture analysis, and continuous crop model coupling BPNNs, the results showed that the calculated accuracy of the canopy reflectance model of row crops coupling with BPNNs is the highest performing (RMSE = 0.0305). 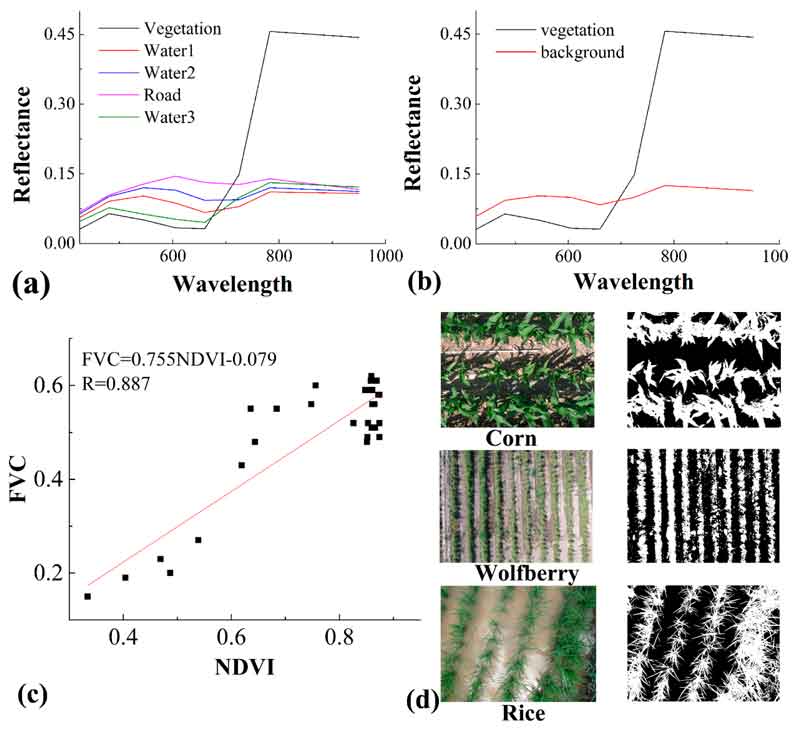 Fractional vegetation cover (FVC) and normalized difference vegetation index (NDVI) are the most important indicators of greenness and have a strong correlation with green biomass.

The objective of this study was to evaluate a hand-held GreesnSeeker (GS) active remote sensing instrument to estimate NDVI and FVC in the spinach plant. In this study, the color indices of the G-B index and Excess Green (ExG) were used as color vegetation indices to discriminate leaves from soil background.

In assessing the nitrogen rate on the NDVI of GS, the results showed significant differences only at the short period of growth stage (28 to 36 DAG). The results revealed that GreenSeeker performed well for estimation both chlorophyll and biomass yield of spinach crop and it could be used as a suitable instrument for estimation of leaf area index in the middle of the plant growth period.

The Handheld Greemseeker and height of the sensor. The same height you may apply when using Petiole Pro for measuring Fractional Vegetation Cover

The segmentation results of the crop at a different stage of growth. a and b are early stage, c and d are the late stages of growing 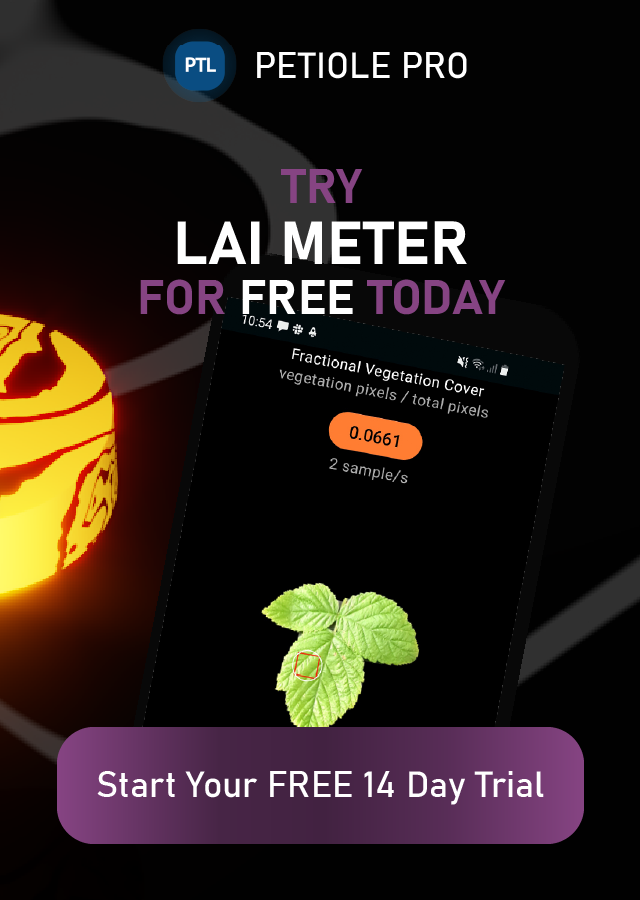 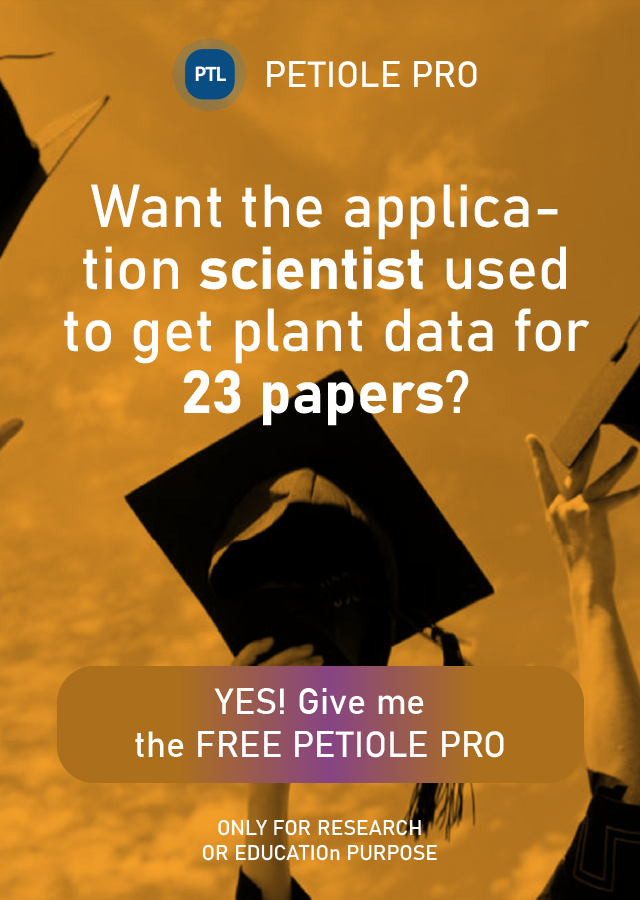